The “ARPA Music Group” started in 1983 with 6 players and rehearsed at the Flinders Street School of Music which also provided music and conductors who were either students or lecturers. As the Group improved it commenced entertaining in the Community. In 1989 Ken Berris joined the group as Musical Director and initiated large improvements in repertoire and performance. About 10 to 15 Concerts were presented each year with programs consisting of light to classical favourites, popular and middle of the road music.
In 1996 it was known as The Variety Orchestra.
In 1999 we had 25 permanent players plus a few guests and the privilege to give the opportunity to Rae Cocking’s Conservatorium students to experience singing with an Orchestra. 1999 Samantha Rubenhold, 2000-2001 Shannon Widdison, 2002-2004 Kerry Wake-Dyster, 2005 Desiree Frahn. We have featured in many concerts the soprano, Jane Lautenschlager and / or Etiennette Fennell who also plays cello in the orchestra.
The Orchestra continues as an excellent avenue of providing performing experience.
From 2012 Conservatorium students are welcome to sit in as guests.
The membership is not restricted to “Retired” persons and it has grown to 45.
Due to the large size the Orchestra restricts performances to suitable sized venues.
By its nature the Orchestra is not a profit making group so membership fees and door profits enable it to pay rent, maintain its library and other operating expenses.
Ken Berris received the OAM in 2002 amidst his busy 80th birthday celebrations.  In 2019 the Orchestra changed its name to the Cumberland Park Orchestra.

Rehearsals are Thursdays from 10am to noon :
. . . The only Adelaide Community Orchestra rehearsing on a week day.
. . . Cumberland Park Community Centre at 390 Goodwood Rd, Cumberland Park.

ARPA Orchestra Aims :
To provide the opportunity for like minded people to make music and enjoy fellowship.
To enhance our own capabilities and to share this with the wider community by giving public performances of rehearsed works. 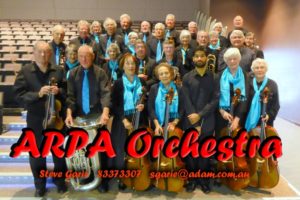